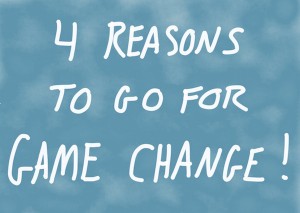 Tthere are 4 advantages that leaders who strive for game change achieve that their competitors and peers don’t..

First, we have to define what I mean by game change…

Number One: I can tell you what a game change is NOT:

A game change is not increasing your sales or profits 10% year over year. It’s not just surviving. It’s not growing along with the rest of your market. It’s not being happy with far, far less than both you and your business are capable of.

And a game change isn’t working harder and harder to achieve smaller and smaller gains in sales, growth and profits.

Number Two: I can give you examples of game changes that my clients have created.

… When you double your customers by making a two-word change in your presentation — that is a game change.

… When you make a simple shift in strategy to focus on only one type of customer segment and go from $1.5 million to $7 million in the next 2 years — that’s a game change.

And this is important…

Those game change results were achieved using LESS time, money and effort than the leaders were investing before.

This fact amazes me most: game changes often require less time… Less money… Less effort than you are currently pouring into your organization.

It is possible to expend fewer resources to achieve 300% more sales, profits and success than you are achieving now.

How is this possible?

I mean you need to put in “110% effort” and take “massive action” and work with “extreme productivity” to get ahead, right?

Much like the jiu-jitsu black-belt, game change results achieve their impact by working on superior positions, leverage points and constraints.

They don’t try to out-work or out-muscle the problems and competitors — they out-think them.

For example: One of my clients was frustrated that sales weren’t going up — despite hiring new managers, investing in sales training and updating their CRM system.

After taking a hard look at where business was really coming from, it became apparent that all of their team’s effort was being applied against a target market that had created the fewest results. The results were actually coming from professional referral sources like CPA’s and Attorneys.

Once they had this simple “Ah Ha” they shifted their sales team’s efforts to creating more professional referral relationships and doubled sales in a month.

Third, game change results often occur when a business stops doing everything and focuses on only a few 80/20 actions.

Much in the same way a farmer increases the size of fruit by pruning back branches, a business can leap forward when energy and force that are going everywhere are focused into a few high-leverage actions.

In each case, they simply rearranged or redeployed existing assets. And in some cases, they actually stopped pursuing some activities all together.

If you want to achieve more results, for less effort, then you need to stop pursing small, incremental changes and start going for game change.

Do this – today — define what game change would look like in your organization, in your work or in your world.

Take a few minutes, define an area like leads, sales, profits, market-share, whatever; then take some time to crystalize in your own mind what game change results would look like in this area.

In the comments below, I’d love to hear your stories of game changes you’ve created or witnessed.